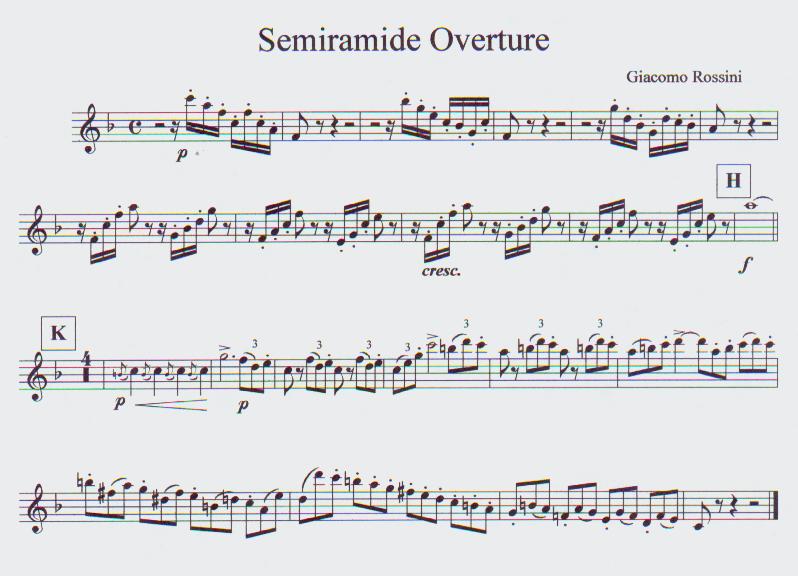 Rossini Operas are mainstays of the repertoire, as are their orchestral overtures. The chief demands placed on the clarinet in all of Rossini's music are to play lightly and quickly. The overture to Semiramide is typical of this. While the main solo asked on auditions is in the middle of the Allegro, there are a few other pitfalls to point out. The figure at letter A at first looks difficult, but with practice can be played as fast as needed and with the proper rhythm. Accenting the staccato note a bit helps play the off beats without rushing. Letter A begins a typical "Rossini" crescendo - widespread in all of his works. Always save a bit of volume for the final push at the end of the long crescendo passages.

The first difficult spot for the clarinet comes in the Allegro, 6 measures after letter G. The woodwinds all toss around this figure and it is important not to be late. Usually played quite swiftly (a quarter note equal to as much as 152), you may insert a slur from the fourth to fifth notes in the run if you need to. Don't be late, and don't rush the figure. In performance it is OK, even preferable for the first note of the run to pop out, but in audition this is not as kosher. Thinking of the first three notes as a pickup to the fourth beat of the bar helps you to enter at the top in p. Beginning 4 bars before H the passage is now easier, and you are in octaves with the flute. Don't forget to crescendo into H. The rest of the orchestra will be getting quite loud at this point and you still need to be heard. Also be careful not to slow down and/or get heavier as you get louder.

The passage usually asked for on auditions begins after K. This solo is over pizzicato quarter notes in the strings. While it is fast, it needs to sound relaxed and unhurried. Play the first bar with the grace notes close to the quarters, and play the quarters on the long but separated side - not short. The hairpin in the first bar should go all the way to a Rossini forte, which is close to a Beethoven f, and come all the way back to p by the fourth beat of the second bar. From here on out there are generally two schools of playing this solo. One is to be fairly simple and let the line speak for itself, the other to play with dynamics and color as much as possible in the short figures of the solo. While the latter can border on trite and contrived if overdone, this is opera and I prefer it to the former. Having said that, you may think of the first bar as quarters leading all to a rather bold G which retreats in dynamic and color to a dolce p. The next four notes can be quite cute in the following manner: A small hairpin down is played over all four notes; give a little poke accent the F to make light of the fact that the figure is played on the weak beat; clip the D, but do not play it early; play a short E and a soft and short C. Repeat the figure in the same manner but piu p. For the third time play louder than the other two and start a small cresc. that continues through the C major arpeggio up to the high C. Play this C reminiscent of the G in measure 2 of the solo. This illustrates the architecture of the solo nicely. Repeat the B-D-C-A figure as you did the earlier triplets: p, piu p, meno p/cresc. leading to the D. Following the long high D the next 5 notes really belong in to the phrase that continues in the next bar, so make a bracket in your mind between the D and the A in the 10th bar after K. This will of course be easier if you again have phrasing reminiscent of the G in the second bar of the solo and start the triplets again p. Playfully move through the next bar careful to keep all twelve note in even rhythm without crushing the two that are slurred. A slight poke accent on the articulated beats is both playful and reminds one of the figure at letter A. A small cresc. through this bar is good, but save for a much bigger cresc. in the next bar. In 12 after K, you can stretch slightly the octave leap for dramatic and charming effect. It is from the top D that you should begin a large cresc. through the whole bar. Arriving f at the G in the next bar, play each beat-long cell softer than the one preceding it and still with the accent on the articulated beat that this figure gets. Counting 5-4-3-2-1 to yourself while you play this bar and the final note in the next is a perfect way to illustrate the attitude with which this dim. should be played. This is an awful lot of discussion for a 10 bar solo that should sound like an unconcerned walk in the park, but a little nuance goes a long way with this cute and refreshing piece. Of course, this solo can be played with a wide variety of acceptable phrasing as long as it does not contradict the character of the piece.

The rest of the overture is merely a recap of themes already played. When the Allegro triplet solo comes back, you are playing the lower-octave line, which drops out after a few bars. 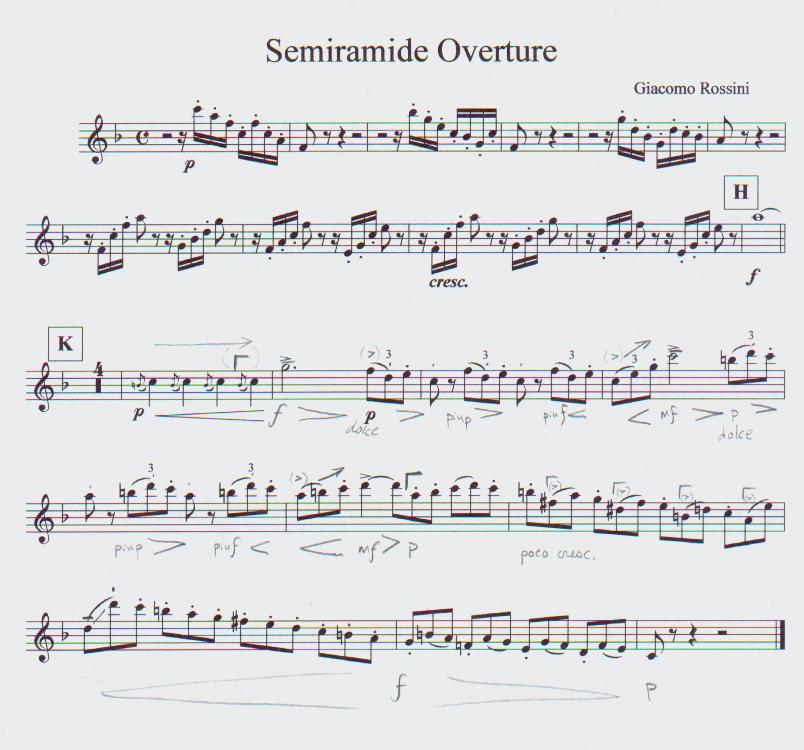